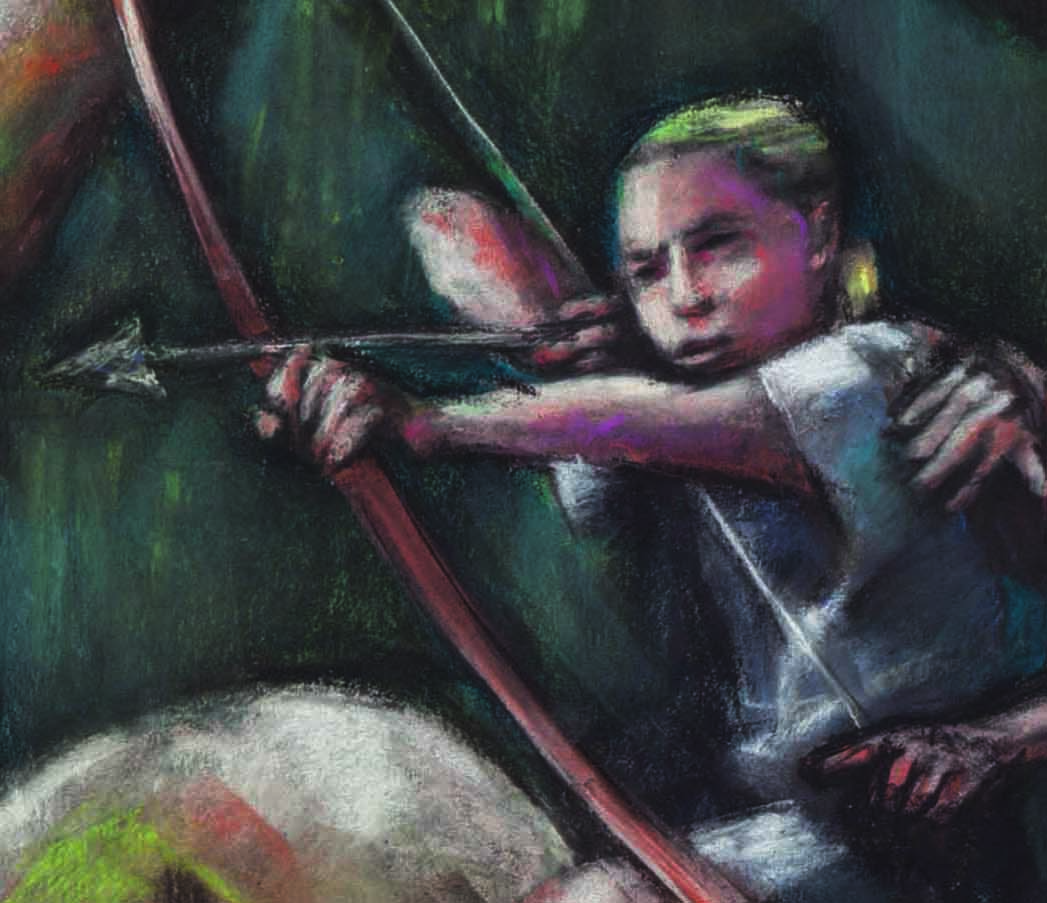 Arken turned his attention to the rock on the ground before him. His task was simple: lift the heavy stone and leave it balanced and still on the post. But he had never lifted such a heavy stone before. He watched his classmates take their places. Arken wore only his white, knee-length tunic and sandals for his test, while the rest of the class had bronze armor over their tunics. Bronze helmets shielded their heads from the blazing sun. They carried wooden sparring swords in their sword belts and carried round shields painted blue with the white harse head of Lanth. Their armor rang with the music of bronze as they joked around and took their places sitting cross-legged on the courtyard clay.

“Don’t take too long, Arken,” one of the boys encouraged while the others laughed.

It was easy for Arken’s classmates to laugh. Having already passed their tests, they were in a happy mood because their graduation was guaranteed, and they would soon be at sea.

Being the youngest in the class, Arken was the last to reach his fourteenth birthday and take the test. Arken stared at the heavy round stone lying on the red clay of the courtyard next to the post. If he passed the rock test, he would graduate from the Lantish Military Academy and join his class at sea for their moonth-long training mission. 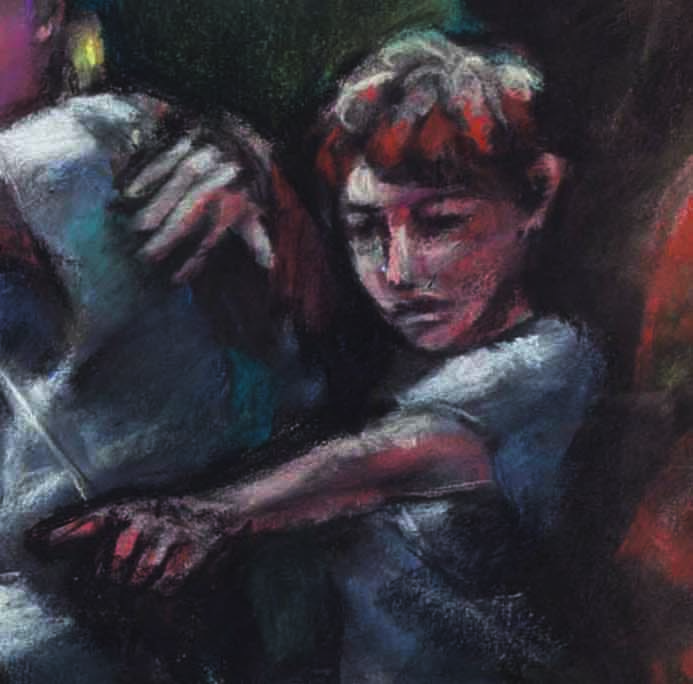 Heir to the throne of Tolaria, Asher d’Will becomes blood brother to Arken Freeth during the course of their journeys together. He wants to be a healer, and his skill comes in handy time and time again.

“Hey, we’re the last two without a cabin!” Arken turned around to see a boy speaking to him. He was the only other cadet left on deck, since all the others had found their cabins.

To Arken’s surprise, he didn’t recognize this boy.

“I’m Asher d’Will.” The stranger stood a finger shorter than Arken. Tendrils of curly, brown hair sprawled around his head like runners escaping the pot containing his mother’s climbing plants. His hair wasn’t very long, and Arken realized he was one of the few cadets he’d ever met that already had short hair. 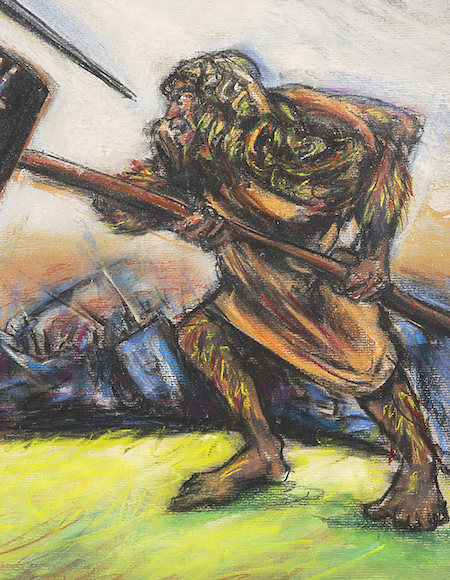 In the Neanderthal Nander tribe, Ord is the son of Mar, the tribe’s healer. He is strong and courageous and becomes like a brother to Arken as they save each other from danger during their journeys to and from the Water Cave where the Nanders live.

“My name Ord. I help you get free.” The Nander whispered over his shoulder in Lantish.

“You speak Lantish?” Arken whispered back despite being stunned for a moment by the Nander’s ability to speak his language.

“Yes.” The Nander nodded his head vigorously and his powerful shoulders shook the small tree.

“How?” Arken asked while realizing Arlet, their Nander grandmother, while strong, was weak in comparison to this young male Nander. If he had to fight to the death with the Nander, Arken was certain the Nander would not be the one dead at the end of the contest. 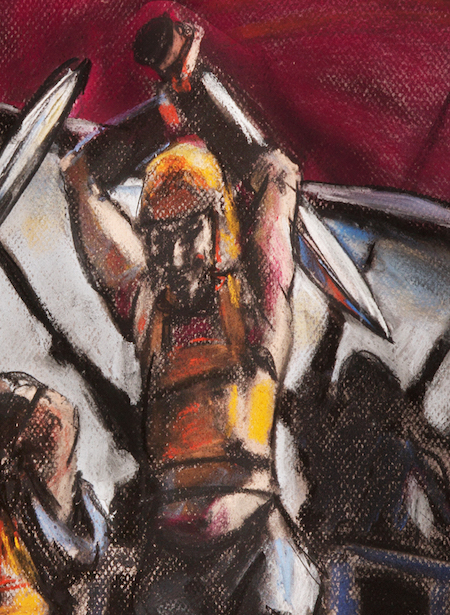 Yolanta is the Admarg of his fleet and the king of his small country of Tolaria.

“Faster!” Yolanta roared. “We have to catch them.” The drumbeat quickened, and with each oar pull the ninety-five foot Reaper surged across the flat sea. Yolanta pressed his thighs against the bow railing and glared ahead at the fleeing Tolarians, wishing his stare was a grappling rope able to pull ships back.

Water sparkled off the Tolarian ships’ oars ahead, making rainbows from the sunset beyond. The last of the fair, offshore winds had quickly carried the Reaper close to the fleeing Tolarians, but just moments ago the winds had died.

The five green-hulled Tolarian ships with large slave crews and long, thin hulls had quickly lowered sail and set the slaves to rowing. They were so close Yolanta could see Princess Sharmane standing on the command deck of the lead ship. He shook his sword overhead.

“Curse Tol and the Tolarians!” he screamed at the Princess’s ship. But if the Princess had heard across the threehundred- leg gap of water between them, she didn’t look upset. Yolanta hated the Tolarians. They had plagued his Tookan people since before his father’s time. The Amarrats, his new allies and invaders of Tolaria, were welcome to the Tolarian land as long as they left his Tookans alone to plunder trade on the Circle Sea. 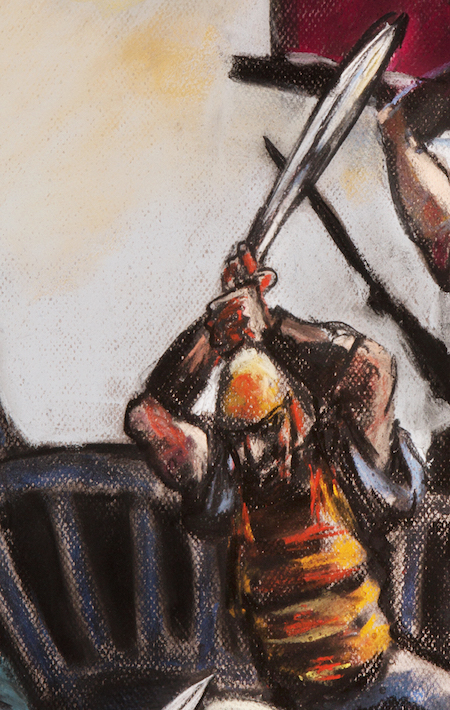 Brumbal, a Tolarian serves as captain of the Reaper under Yolanta and is commander of Yolanta’s fleet.

Yolanta glanced up at Brumbal, the only man on board taller than him. Looking at Brumbal felt like looking in a reflecting plate because they both had the radiant blue eyes deep set behind the heavy brow, sloping forehead, and large jaws of the Tookan people.